Making (your) Mental Health a Priority!
Presentation of mural for lustrum of the APAP at Boardwalk Captain Hodge Warf

Watch the introduction video or read more about it on our special lustrum page: https://www.apapsxm.com/lustrum/
And make sure to visit it soon if you can! 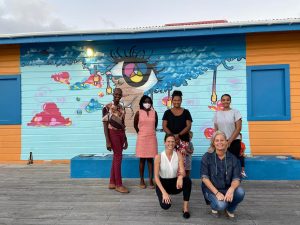 Psychological Recovery after Hurricanes Irma and Maria September 2017 on St. Maarten – Insights, Information and Experiences from the field

We are proud to publish this document about our findings and learnings on experiencing and recovering from a hurricane, with specific focus on the psychological aspects in this matter. Click here now to access it: 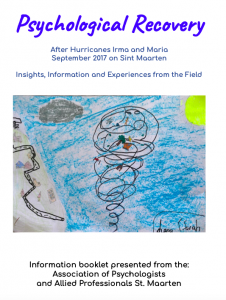 For the official article from Government of St. Maarten, click here.

Next Level Thinking (NLT) is an initiative of the Department of Communication (DCOMM). This is a department that falls under the Ministry of General Affairs of the Government of Sint Maarten.

NLT came about after the group, APAP SXM was recognized as an instrumental key stakeholder by the Ministry of Public Health, Social Development & Labour (Ministry VSA) post Hurricane Irma to help schools and the general public at large to understand and deal with Post Traumatic Stress Disorder (PTSD) or other psychological reactions in the aftermath.

DCOMM finds it important to provide valued information the the general public via various programs in order to keep the community informed. It was after the first interview with APAP SXM on the DCOMM Program ‘Inside Government’ that it was realized how instrumental the topic of psychology, human behavior and thinking plays a major role in how we shape the future of Sint Maarten since becoming a country within the Kingdom of the Netherlands.

Topics covered in Season 1 of NLT are 1. psychology introduction (general introduction to psychology and what it entails); 2. stress in adults; 3. stress in children and adolescents; 4. why do we celebrate; 5. healthy lifestyle: alcohol/ drugs/ food; 6. dealing with the upcoming hurricane season; 7. positively influencing a child’s development; 8. what if your child is developing differently; 9. mental health, what does it mean and how is it to live with a psychiatric disorder; 10. life with a disability.

Public Service Announcements after the Hurricane(s)

Shortly after the hurricane a Public Service Announcement (PSA) was recorded by APAP. Maybe you heard it on the radio and/or saw it on our Facebook page. Our goal was to inform the community of St. Maarten during the recovery process to take good care of themselves. Awareness of the psychological effects of being in this situation is the start point, in our opinion, to be able to prevent psychological problems where possible. We ask you to listen to the message and share it where possible!

In the last few weeks some news items and articles concerning the psycholoigcal well being of the people on St. Maarten after the hurricane have been aired and published. For example one of our members was interviewed for a documentary program from the Netherlands (Zembla). You can watch this here:
https://zembla.bnnvara.nl/nieuws/rampspoed-in-het-koninkrijk

The Minister of Home Affairs and Kingdom Relations Kajsa Ollongren addressed this issue also in the Second Chamber in the Netherlands: that the focus should not only be on the material aspect of the reconstruction, but also on the immaterial aspect, to help the people in dealing with the emotional consequences of the hurricane.
https://www.thedailyherald.sx/…/71367-mental-traumas-will-n…

The following article gives a more nuanced overview of the message what our member was bringing over in Zembla, that is the amount of people who can experience psychological distress at this moment is significant and that this topic needs sufficient attention on the island (it is written in Dutch):
https://www.volkskrant.nl/…/posttraumatische-stress-bij-ee…/